This article looks at the expansion of the Glasgow Coma Scale to assist in classifying severity and prognosis in brain injury.

What is the Glasgow Coma Scale?

The Glasgow Coma Scale (GCS) is a term which will be familiar to anyone who has attended hospital with a head injury and to fans of Holby City, Casualty and other TV hospital dramas who frequently reference the GCS.

Developed at the University of Glasgow in 1974, it is used to assess the level of consciousness after an injury and measures response to stimuli in three main areas – eye, motor (movement) and verbal. The quality of each response is assessed by paramedics who attend the scene of an accident, as well as triage, A&E staff and the attending clinicians once a person is admitted to hospital, and the quality of each response is ‘scored’, giving a final 3 to 15 point score across all three main areas. So, for example, someone who scores 15/15 would be a patient who is fully alert and responsive, whereas a score of 3/15 would indicate that the patient is totally unresponsive. 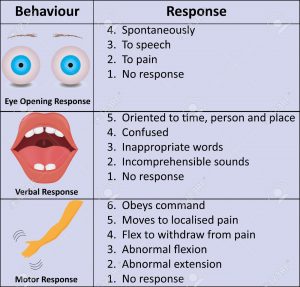 An updated system, known as the GCS-Pupils system (GCS-P) has recently been published, which produces a score system aimed to assist with assessing the severity of and prognosis for, a brain injury. The new system combines the reactivity of a patients pupils which is a key prognostic indicator, with the severity of injury as determined by the GCS.

So in practice, the GCS assessment will be carried out followed by an assessment of the patients pupil reactivity which is scored 0, 1 or 2 (poor pupil responsiveness being scored 2), and this score is then subtracted from the GCS score, resulting in the GCS-P score (1-15). Other factors such as age and CT findings also impact on the long term prognosis and these must also be considered when predicting prognosis.

Combining all these factors, the team behind GCS-P have developed prediction charts based on the GCS-P, patient age and simplified CT findings to show (1) probabilities as to the risk of death and (2) probabilities of favourable outcomes in patients 6 months after TBI which can be used by clinicians in decision making as well as to manage expectations of patients and families.

About the authors of GCS-P

GCS-P was developed by a team from University of Glasgow and University of Edinburgh which included one of the original creators of the GCS. When asked about the study, the authors commented:

‘Decisions about patient care in the immediate aftermath of a head injury are influenced by physician perceptions of the patient’s likely outcome, so its important that assumptions that underlie these decisions are correct. Working together between Glasgow and Edinburgh, we have developed the GCS-P and associated prognostic charts. These simple and easy to use tools provide reliable estimates of outcomes at 6 months and will support clinician decision making in neurotrauma.’

The Glasgow Coma Scale is a simple to use scoring system, used throughout the World which can be performed, interpreted and communicated by people with even a basic level of training. It is hoped the GCS-P, which is equally easy to perform, interpret and communicate, will also be adopted Worldwide for the benefit of those who have sustained a brain injury.

Help from us
News
Research

Can we help you with our grant scheme?

Can you help with some research into the experience of a partners grief and a child’s behavioural and emotional challenges following a parental brain injury?