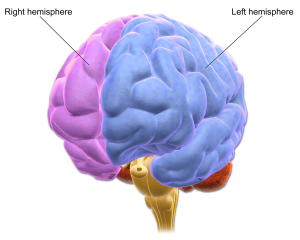 The Cerebral Cortex is the wrinkly outer most layer that surrounds the brain, that looks similar to a walnut and is about 1.5mm to 5mm in thickness.  If the brain was split into two down the middle you would have a right and left hemisphere and although equal in size they don’t carry out the same functions and they control the opposite side of the body (left controls the right hand side and the right controls the left).

As well as dividing into a left and right hemisphere, the cerebral cortex can be further divided into a number of areas, known as lobes that control various functions.

The frontal lobe is the area behind the forehead and controls activities such as problem solving and decision making, as well as being involved in personality and the control of emotions and behaviour.  It is in essence the ‘control panel’ of our personality.

Following a Frontal Lobe injury the ability to make good choices and recognise consequences are often impaired.  This can cause increased irritability and mood swings.

Located behind the frontal lobe, at the back of the brain above the ears.  It processes sensory information regarding the location of parts of the body as well as interpreting visual information and processing language and mathematics.

With a Parietal Lobe injury there could be a difficulty with writing, maths, disorders of language and the inability to perceive objects normally.

Situated behind the ears, this area holds the bulk of our memories and our ability to understand things and speak.

Damage to the Temporal Lobe can have an impact with the ability to speak, memory loss, learning and hearing.

At the very back of the head, behind the parietal lobes, are the occipital lobes, which are responsible for vision which includes distance and depth, colour, object recognition and memory formation.

Any injury to this area can cause partial or complete blindness.

Internal areas of the brain

Hidden in the middle of the cerebral cortex are a number of small nerves that control functions of the body. 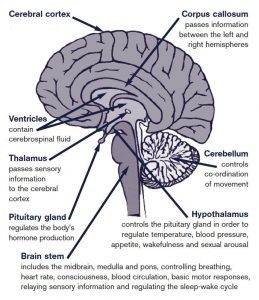